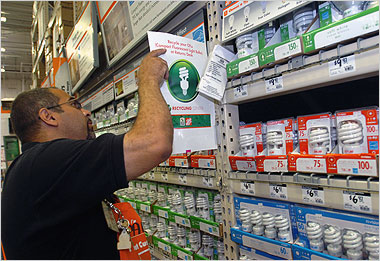 Alan Zale for The New York TimesReady for the switch to compact fluorescent light bulbs?

Last week, the Senate Energy Committee held a hearing on two bills, one toupdate energy-efficiency standards for appliances and a second that would repeal federal energy standards,which go into effect next year and will make old-fashioned 100-watt incandescent light bulbs obsolete.

During the hearing, Senator Rand Paul, a Republican from Kentucky, complained to Kathleen Hogan, a deputy assistant secretary at the Energy Department, about the department's “busybody nature” in restricting choices for consumers. He also blamed her for the poorly functioning toilets in his house.

The light-bulb issue has become highly politicized. Conservative lawmakers say the government should not be trying to dictate to Americans what light bulbs they can use.

Why are some Americans put off by attempts to encourage more energy efficiency in their homes? Why are Europeans and Australians, for example, more amenable to small changes for the sake of energy conservation?