What to look for in an energy-efficient LED light bulb. Plus shining examples like the Cree TW, GE Reveal, and Sylvania Ultra HD

FINDING a light bulb that casts a crisp, flattering glow can be complicated these days. The most advanced bulbs on the market—known as LED models—are kind of like the Tesla Roadster of the lighting world: eco-friendly, high-performance and loaded with dizzying options.

Prices have plummeted, too. Although at roughly $10 to $20 each, the average LED bulb is more expensive than an incandescent, you can get superlative light for that premium. 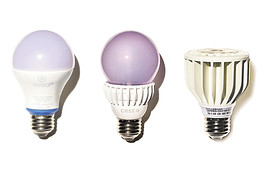 The only problem is, you can rarely tell what kind of light a bulb will emit just by looking at the box. "We're still in the wild West," said Mark Rea, director of the Lighting Research Center at Rensselaer Polytechnic Institute. "You almost need to be a lighting nerd to know what to buy." The only sure way to assess a bulb's performance is to test it at home. Dr. Rea recommends buying from a retailer with a good return policy.

The industry uses two standard metrics to describe a bulb's light quality. "Color temperature" indicates whether the white light will skew warm (orangy) or cool (blue). For an incandescent-like glow, choose a color temp of 2,700K or 2,900K. The higher the temperature, the cooler the glow.

The second number is "color rendering index," or CRI, which indicates how accurately the light renders colors. According to conventional LED wisdom, a CRI of 80 (out of 100) is fine, but lighting aficionados will want to opt for 90.

These specs can be misleading, however. We found that bulbs with the same CRI could make the objects in a room look markedly different. According to Dr. Rea, that's because CRI doesn't indicate how vividly a bulb will render colors, whether hues will pop or appear more muted. Again, the best way to tell is an at-home test. "Look at the colors you care about—the faces of people in the room," said Dr. Rea. "Do they look as you expect?" Color temp can be an imperfect guide, too. Bulbs that we tested with the exact same color temperature (2,700K) varied in appearance from yellow-tinged to cooler, pure white.

LED bulbs are available in a standard bulb shape, which casts light all around, as well as a floodlight-style shape that shines in a specific direction. In general, we found the light quality from the floodlight-style bulb to be superior. Use these in lamps that direct light in one direction—like a task lamp or a recessed ceiling fixture. For the latter, Dr. Rea recommends running new bulbs continuously for 24 to 48 hours to make sure they don't fail prematurely. "Heat will kill these things," he said.

4. MAKE SURE IT DIMS PROPERLY

If an LED is dimmable, it'll say so clearly on the label. Just know that a compatible dimmer may be required, and that, unlike with incandescents, LEDs don't warm in color as you dim them. Sylvania's Ultra "Sunset Effects" bulb offers a clever hack: It shines warm white at full brightness but shifts to an amber-colored LED as you dim the bulb. (We found the effect to be convincing at the dimmest setting only.) Philips's DimTone bulbs have a similar feature.

5. PUT AWAY YOUR HAZMAT SUIT

Unlike compact-fluorescent bulbs, LEDs do not contain mercury. "LEDs are much safer than fluorescent because they're not likely to release vapors," said Oladele Ogunseitan, a professor of social ecology at the University of California, Irvine. A study he co-authored found that a sample LED light bulb contained toxic materials, but he clarified that "if the case [of an LED bulb] cracks, it poses no risk to individuals." Still, LEDs are small electronics and should be recycled like a cellphone or computer, he said.

When it comes to light quality, one size does not fit all. Picking a great light bulb is as personal as choosing the perfect paint color for a room. That said, there are a few models worth putting on your shortlist. 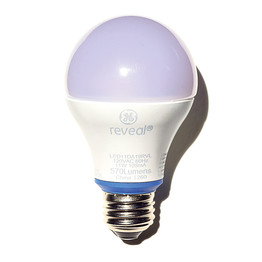 At first, the light from the GE GE +0.11%Reveal 60-watt equivalent bulb (around $18), may seem cooler than you're used to, almost clinical. But give it a few days. Designed to strip away dingy yellows and highlight reds, it casts a pure white light that makes colors pop. A floodlight-style version of the bulb is also available. 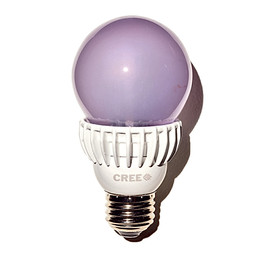 If the light of the GE Reveal appears too cool, the Cree TW Series 60-watt equivalent is a good alternative. It has a slightly yellow tint, similar to an incandescent bulb, and renders colors exceptionally well. The bulb is available at Home Depot stores in California and a few other states, as well as online. The price varies from $9 to $16, depending on local utility rebates. 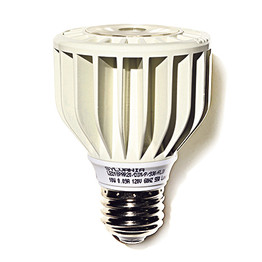 For maximum sparkle, nothing we've seen compares with Sylvania's Ultra HDfloodlight-style bulbs ($22-$35), which have been tweaked to accentuate reds associated with skin tone. Lowe's is the exclusive retailer; online, search for part number 352306; in store, look for "HD Lighting" on the package. A standard-shape bulb in this series will be released this summer.