Creators say it's the most energy efficient light bulb ever produced 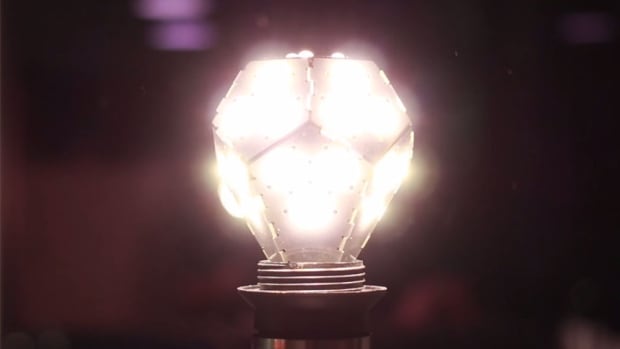 The brightness of the Nanoleaf Bloom can range from that of a night light to that of a 75-watt incandescent light bulb. (Nanoleaf/Youtube)

An ultra-efficient light bulb that you can dim with a regular light switch has been invented by a trio of engineers from Toronto.

Gimmy Chu, Tom Rodinger and Christian Yan of Nanoleaf, now based in San Diego, are in the midst of a crowdfunding campaign on Kickstarter for the Nanoleaf Bloom.

The LED-studded "bulb," billed as "the most energy efficient light bulb on the market," fits in a regular light bulb socket. It gives off a warm light that can vary from the brightness of a night light (120 lumens) to that of a 75-watt incandescent bulb (1200 lumens) using just 10 watts of power. 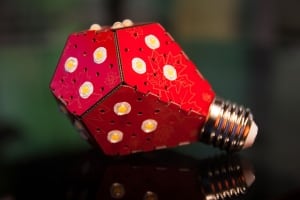 The Nanoleaf Bloom takes three seconds to ramp up to its full brightness. As it's ramping up, you can lock it into a lower brightness by flipping the light switch quickly off and back on. (Courtesy Gimmy Chu/Nanoleaf)

When someone switches it on, it takes three seconds to ramp up to full brightness. As it's doing that, you can lock it into a lower brightness by flipping the switch quickly off and back on, thanks to a microprocessor built into the bulb.

Chu said a dimmable light has a couple of advantages.

"It allows you to save significantly on energy costs," Chu said.

At 50 per cent brightness, it uses just 25 per cent of the electricity that it uses at full brightness.

"It also allows you to set any mood with the adjustable brightness."

In order to take advantage of those features, however, most dimmable bulbs require a dimmer switch, and most light switches are not dimmer switches, Chu said. Buying and wiring a dimmer switch is not always easy, he added: "You might have to hire an electrician."

The Nanoleaf Bloom, which aims to make dimming the lights more convenient, follows up on the trio's previous invention, the Nanolight. The similar, but non-dimmable bulb, was previously billed as the "world's most energy efficient light bulb." That project raised $273,278 on Kickstarter last year and delivered over 7,000 bulbs to 5,746 backers.

The Nanoleaf Bloom can be pre-ordered on Kickstarter for $40 or $10 more than the Nanoleaf.

Chu acknowledged it's a hefty price for a light bulb, but he says it's because the device uses the best custom components.

"Our hope is that with volume, we'll be able to bring down the pricing," he said, adding that his team's dream is to get the bulb into stores such as Canadian Tire.