Lighting Up the Lawn With 16 Million Colors 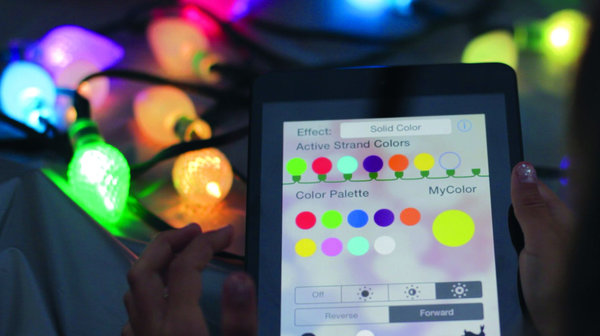 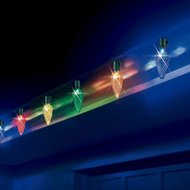 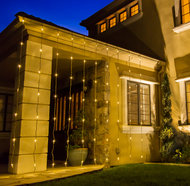 Then it escalates: Twinkling lights are in the shrubs, Santa’s on the roof, an inflatable Frosty the Snowman is on the lawn, and next to him is one of those little white wire reindeer with a head that turns ever so slowly.

Nice work, holiday decorator. But do you have lights that can be controlled by tracing your finger over the face of a smartphone? A reindeer face with a mouth that moves with the music you’ve provided over an FM radio connection? Do you have 16 million colors available at the flick of a switch?

New holiday lighting systems and smartphone apps can make that inflatable Frosty look downright austere — from an exotic lighting system called Lumenplay to a shivering snowman from the outfit that created that classic of kitsch, the singing mounted fish, Big Mouth Billy Bass.

The secret of the 16 million colors is single light bulbs that hold three LEDs — red, blue and green. Those three can be dialed up and down in various combinations by a smartphone app, creating an unimaginable number of possibilities.

Controlled via any Bluetooth smart device, the app has a range of up to 150 feet, so you can control the colors and action from across the yard or from your couch, simply by moving your finger along a color wheel on the screen of your Apple or Android phone or tablet. And they can be synced to music, set to twinkle or made to dance in nearly any pattern you’d like.

Since the color range is so varied, the same lights can be used for Halloween, Easter, Fourth of July, just about anything. They can even be left up year round — the holy grail of exhausted, height-fearing homeowners.

Lumenplay won’t be widely available for shoppers this year. The company that designed it, Rigado L.L.C. of Salem, Ore., is shipping 10-foot and 20-foot light strands only to supporters who backed the company’s successful crowdfunding campaign onCrowd Supply.

But it hopes that by spring, those lights will be marketed as patio lights or advertised as perfect for weddings and other warm-weather occasions, said Amanda Besemer, marketing officer for the company.

Lumenplay lights do not come cheap. A 10-foot length costs $54, but the price per foot goes down as more strands are added. Should your budget allow for it, as many as 17 20-foot strands can be linked together.

For those who are willing to make do with fewer than 16 million color variations but still want a light show that can adapt to multiple holidays, there are less expensive choices.Brite Star Manufacturing, based in Philadelphia, sells Symphony of Lights. This lighting set comes in seven colors, has four different patterns and costs about $27 for each 15-foot length. Instead of an app, a controller is attached to the wires.

The addition of smartphone apps and R.G.B. (red, green and blue) units is the latest variation in a trend that has been going on since light-emitting diode holiday lights started popping up in stores over the last decade.

A San Diego company, Environmentallights.com, says it has close to 800 holiday lighting products, thanks to the possibilities created by LEDs. Among those products is a 10-by-10-foot LED light “curtain” that can be hung on a wall, indoors or out. A controller sets the speed of white lights that flow down the strands like water, at rates that range from “a trickle to a torrent.” Price: $125.50.

Another offering, light tubes that mimic snowflakes, is likewise not cheap, beginning at $26 for each footlong tube, $47 for the 36-inchers.

Of course, for some, money is no object. For aspiring Clark Griswolds (the patriarch in the National Lampoon “Vacation” movies), there is Christmas in a Box, a package available through Animated Lighting of Kansas City, Mo.

Christmas in a Box is a preprogrammed light controller that allows customers to animate their light displays — LED or incandescent — and synchronize them to music.

The package contains a “monster brain,” a player that is about twice the size of a smartphone with connections for 16 channels of lights. The lights sync via “show cards” with tunes like “Rudolph the Red-Nosed Reindeer” and “Jingle Bells.”

The 16-channel version costs from $690 to $900, but there’s also a four-channel version, Christmas in a Box Junior, for about $500. For those who want to share the music with gawkers in their cars, Christmas in a Box — All In One includes a miniature FM transmitter with a 150-foot range. By tuning to FM 106.7, the show can be seen and heard in cozy comfort, said Paul Smith, Animated Lighting’s owner.

Technology has also made it possible to manipulate lights so that lighted characters, like reindeer and pumpkins, appear to be singing along. For another $795, a four- by six-foot two-dimensional reindeer face sings 20 minutes of eight specially programmed songs.

Despite the expense, some residential customers pay Animated Lighting to come out and design displays that can cost $10,000 and more, Mr. Smith said. “A lot of them say, ‘I want to just smoke people. I want people to say where in the hell did you buy that?’ ”

Inflatable snowmen and Santas are cheap by comparison, but there are a few new developments even in that department. Instead of just sitting on a lawn, the newest holiday icons have a little something extra.

The Amazing Snowman, for instance, blows fake snow from his cupped hands. Created byGlobal Special Effects of Lexington, Ala., it sells for $335 and comes with 15 ounces of biodegradable “snow” that melts within seconds of hitting the ground.

Texas-based Gemmy Industries, the people who 15 Christmases ago gave us Big Mouth Billy Bass, have since built on that success by creating a line of fabric figures that are inflated by an electric motor.

Jason McCann, Gemmy’s chief executive, said that his company “created the air-blown business” and is constantly improving on it. Last year it was illuminated polar bears, snowmen and Santas that arose Phoenix-like with the help of an air compressor.

This year, thanks to the inclusion of a secondary motor, they seem to shiver. A six-foot-tall snowman with the chills was recently selling for $63 at Walmart.