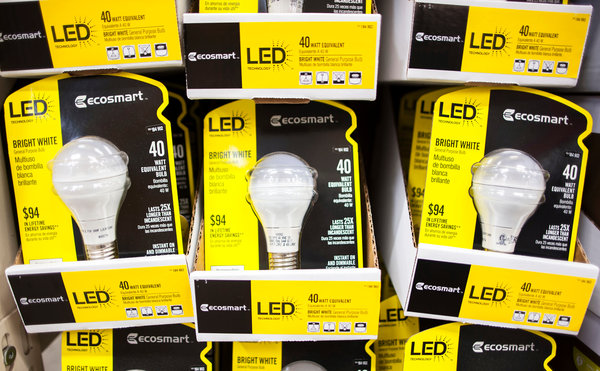 LED, or light-emitting diode, bulbs use less energy than incandescents.

A selection of LED bulbs at Home Depot in Vauxhall, N.J. The life of LEDs is far longer than for conventional bulbs.

Although priced at around 20 times more than the old-fashioned incandescents, bulbs based on LEDs, or light-emitting diodes, last much longer and use far less electricity, a saving that homeowners are beginning to recognize. Prices for the bulbs are falling steadily as retailers like Home Depot and Lowe’s sell them aggressively and manufacturers improve the technology.

And because the light in LED bulbs comes from chips, companies have been able to develop software applications that let users control the bulbs, even change the color of the light, with tablets and smartphones. Apple sells a three-pack of such bulbs, made by Philips, with the hardware to operate them for about $200.

“You’re seeing all of your growth in the LED category,” said Brad Paulsen, a Home Depot merchant. “We absolutely expect LED technology in four or five years to be the most popular lighting technology that’s out there.”

Last year, LED sales, though small at about 3 percent of the residential market by some estimates, grew faster than those of any other lighting technology, according to retailers and analysts.

Among A-type bulbs, the most common, LEDs will outsell incandescents in North America in 2014, according to projections by IMS Research, an electronics research firm that is now part of IHS Inc. And LEDs will become the most popular A-type technology by 2016, with North American shipments reaching almost 370 million, a more than tenfold increase from the roughly 33 million shipped last year, the firm estimates.

Already at Philips, LEDs were responsible for 20 percent of lighting sales last year, according to Ed Crawford, general manager of the lamps division.

Incandescent bulbs, while cheap, are very inefficient, wasting most of their energy as heat as they pump electricity into filaments to make them glow. The government has been pushing consumers to other technologies for several years, in part by phasing out the manufacture or import of the least efficient bulbs.

The first big alternative to emerge, compact fluorescent bulbs, has left many consumers dissatisfied. The light quality is seen as harsher, the bulbs can be slow to warm up and difficult to dim, and they contain toxic materials.

LEDs are more expensive, but offer better light quality and more flexibility. And thanks to heavy marketing by retailers, customers are beginning to discover their appeal.

“The LED you buy, even though you pay even $25 or $30, it’ll last like nine or 10 years,” said Tariq Syed, a machinist at an electrical utility who was eyeing LEDs at the Home Depot in Vauxhall, N.J., on Thursday. “And environmentally, it’s safe, too.”

Bulb manufacturers are rushing into the market, sending prices falling. Home Depot sells some 40-watt-equivalent bulbs for about $10.

“Most of the manufacturers are moving toward new designs in solid state lighting, as are we,” said Jim Crowcroft, vice president for market development at TCP, a company based outside Cleveland that manufactures energy-efficient lighting under its own brand as well as the house brands of several mass retailers.

Although the company still sells far more compact fluorescent lights, growth in that business has slowed, while demand for LEDs is skyrocketing, he said. “In the long run, solid-state lighting is going to make a whole lot of sense for almost every lighting application.”

For the manufacturers, LEDs pose a new challenge. They offer higher profit margins, but because they can last for decades, people will be buying fewer bulbs — of any sort. The Energy Information Administration estimates that total light bulb sales will fall by almost 40 percent by 2015, to just under a billion from 1.52 billion bulbs, and continue their decline to about 530 million by 2035, with LEDs making up a steadily increasing portion of the market.

As a result, many companies are competing to establish themselves as popular brands.

“The company that can dominate will make a lot of money,” said Philip Smallwood, senior lighting market analyst at IMS Research. “So it’s a big push to get into it early.”

With demand growing for LEDs in other uses — like backlighted phone and computer screens, automotive lights and street lamps — manufacturers have been able to develop their technologies and benefit from economies of scale to help bring the price down, said Thomas J. Pincince, the chief executive of Digital Lumens, which sells LED systems to businesses.

In the commercial and industrial sector, use of LEDs is more common than in homes, analysts say, because companies are more likely to do the long-term cost-benefit analysis of buying lighting than homeowners, who are still largely driven by the upfront price.

Goldman Sachs estimates that in the residential sector, penetration of LEDs will rise from 3 percent last year to 16 percent in 2015, still lagging the commercial and industrial sector as well as outdoor applications like parking lots and billboards.

But as the cost of an LED approaches $10 — a tipping point that would speed mass adoption, according to Mr. Smallwood — retailers have been stepping up their efforts to market the lights, often with proprietary brands like Home Depot’s EcoSmart jostling for shelf space with established names like Philips and General Electric.

“One day I randomly walked into a Home Depot and thought, ‘LED — when did that happen?’ ” said Clayton Morris, 36, a host of “Fox & Friends Weekend,” who was buying the bulbs in Vauxhall as part of his project to slowly replace the incandescents in his Maplewood home. “It’s a hefty investment upfront,” he said, “but it just seemed like a great savings.”

At the same time, in an effort to transform light bulbs from a cheap, disposable product into something that consumers might show off to their friends, manufacturers have been adding functions that could ultimately fit into a larger home automation system. Often Bluetooth- or Wi-Fi-enabled, a new generation of LED bulbs offers all manner of new remote controls and automatic responses. The Philips Hue, sold exclusively at Apple stores for the next month, can change colors along a broad spectrum and offers settings that can mimic sunrise in the morning or use a special “light recipe” intended to raise energy levels. The bulb has been a big hit, executives say, attracting a host of software developers who have created free apps for new features, like making it respond to voices or music. The bulb can also tie into the Nest thermostat, a so-called smart device from Apple alumni who helped develop the iPod, that learns consumer heating and cooling patterns and adjusts to them automatically.