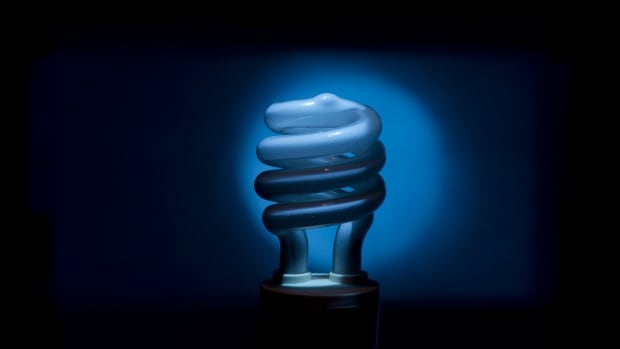 A compact fluorescent light bulb contains about five milligrams of mercury, which is less than the amount in a watch battery.

Most Canadians are using compact fluorescent bulbs, but only a third of them are disposing of the mercury-containing devices properly, a newStatistics Canada report suggests.

The Households and the Environment Survey of 20,000 Canadians, conducted by phone in October and November 2011 found that:

Each bulb contains a small amount of mercury, which can damage the brain, spinal cord, kidneys and liver of humans and other living organisms.

A compact fluorescent light bulb typically contains about five milligrams of mercury — less than the amount that's in a watch battery, according to Natural Resources Canada.

However, mercury-containing devices are typically treated as hazardous waste, because light bulbs are likely to break if buried in landfills. The mercury they contained can then contaminate water and enter the atmosphere. It does not break down in the environment and accumulates in the bodies of animals as it moves up the food chain.

Halifax most likely to trash bulbs

The survey found that Halifax residents were most likely to have thrown their compact fluorescent bulbs in the garbage, with 84 per cent of households reporting that. Currently, the Halifax Regional Municipalityencourages residents to do that.

Residents of Guelph, Ont., were most likely to dispose of the bulbs properly at a depot or drop-off centre (56 per cent) or keep them at home (41 per cent.) 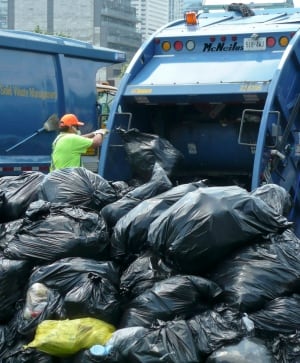 When thrown in the trash, compact fluorescent light bulbs can break, spilling the mercury into the environment. (Patrick Dell/Canadian Press)

Information on the Halifax Regional Municipality website may be contributing to the high garbage disposal rate.

"At this time in HRM the appropriate disposal method for CFL bulbs for householders is to place them in a sealed plastic bag and place it in the garbage for collection," the website's Household Special Waste section reads.

However, the results of the survey suggests that residents in some municipalities, such as London, Ont., were becoming more conscientious about disposal — there 60 per cent of households reported threw their bulbs in the garbage in 2009, but just 33 per cent did in 2011.

Environment Canada estimates that about 1,500 kilograms of mercury were released into the air in 2010 from the disposal of mercury-containing products, including fluorescent light bulbs. That is about a third of our country's total mercury emissions.

When asked to comment on the survey, Environment Canada said it is working on new regulations that would:

"The department is also developing an approach to end of life management of CFL light bulbs that will complement efforts already being made by provincial and territorial governments," Environment Canada said in a statement emailed to CBC News.

At the time of the survey, incandescent light bulbs were not yet banned — afederal ban on 75- and 100-watt incandescent bulbs went into effect on Jan. 1, 2014, with bans on 40- and 60-watt versions to follow on Dec. 31. The ban was put in place because fluorescent bulbs are about four times more energy efficient than incandescent bulbs, which lose a lot of energy as heat.

Before the ban went into effect, some groups such as the Recycling Council of Ontario raised concerns about the fact that the government was not requiring retailers or manufacturers to collect and recycle the spent bulbs and about the lack of programs to track and recycle the bulbs.

Jo-Anne St. Godard, executive director of the council, said the results of the new StatsCan study represent an "opportunity" for the federal government to develop policies that ensure compact fluorescent light bulbs are tracked and managed so that the mercury is recovered from them as much as possible.

Meanwhile, she said, other groups have been trying to do their part. The Recycling Council of Ontario, for example, has been promoting fluorescent bulb suppliers that take back the spent bulbs and has developed a standard for recycling them.

She added that since 2011, public awareness of mercury in fluorescent bulbs has grown, partly because of the work of municipalities. Many municipalities now have programs to collect the bulbs. 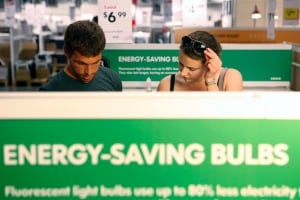 But those programs may not be convenient for the public. St. Godard noted they often only take place at certain dates and locations: "It requires the homeowner or resident to take time to either drive these products to a depot or hoard them in their house until such time that the municipality has an event, where again, the resident has to take the time to bring them back to the municipality."

"If something isn't easy to do, people won't do it," said Amanda Kinden, "living green, living well" coordinator for the Green Action Centre, a Winnipeg-based non-profit organization that promotes "greener living" through public education.

She said many people are in the habit of throwing spent light bulbs in the garbage because that's what they did with incandescent bulbs for years.

She thinks information about proper disposal of compact fluorescent bulbs isn't getting to everyone.

"Government has a big role in education," Kinden said, "but manufacturers who produce these harmful things should also take some responsibility for ensuring that their products are recycled properly, whether or not it's a levy that you get back if you recycle them or a better system for taking them back."

However, the Green Action Centre notes that while the mercury in compact fluorescent light bulbs can pose a hazard if not disposed of properly, the bulbs may also lower the amount of mercury emitted into the environment by reducing the amount of electricity we use.

That's because coal-fired power plants release mercury through their smokestacks and hydroelectric plants may convert mercury in the local environment to highly toxic forms that accumulate easily in living organisms.

Canadians do have alternatives to compact fluorescent light bulbs. LED bulbs are also energy efficient and do not contain mercury.