Basking in a New Glow 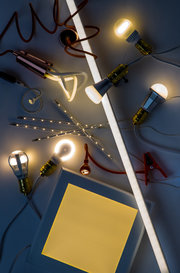 With the federally mandated phaseout of traditional incandescent bulbs entering its final stage, manufacturers and retailers have done well to make the transition nearly invisible to consumers. As of last month, companies could no longer produce or import 40-watt and 60-watt bulbs, following similar restrictions on 75-watt and 100-watt bulbs over the last two years.

Some retailers still have enough 40s and 60s to last a few months, but you may struggle finding them amid the thicket of new lights labeled “40-watt equivalent,” “60-watt equivalent” and the like. While those new bulbs will cost more up front, they can save money in the long term because they require less wattage to produce the same amount of light.

That said, prices on newer bulbs are dropping quickly, even as design and performance improve. So if you lack the energy or money to pursue a lighting overhaul in your home now, sit tight. Your patience — or wariness, or laziness — shall be rewarded.

“We’re right at the beginning of this,” said Marc Voykovic, national light bulb merchant for Home Depot. “The technology is changing so rapidly you’ll continue to see improvements in bulbs as manufacturers are able to crack the code.”

Not everyone can wait that long. My home’s compact fluorescent lights, or CFLs, have grown so old and dim that I had little choice recently but to jump headlong into the morass of the current light bulb market.

Thankfully I had help. In addition to calling Mr. Voykovic, I contacted Cecilia Dupire, principal of Cezign, an architectural and design firm, and Russell Leslie, a founder of the Lighting Research Center at Rensselaer Polytechnic Institute in Troy, N.Y. Lucas Borntreger, an electrician in Kansas City, Mo., also guided me through a fixture replacement, but more on that later.

My panelists said the biggest changes in the lighting market have come in the realm of the light-emitting diode, or LED. A few years ago, LEDs were billed as the next big thing, since they are extremely efficient and durable, to the tune of 25,000 hours of expected life.

But the early bulbs came with “you can’t be serious” price tags (as in $40 for a 60-watt bulb) and gave off light that was as soft and warm as a granite quarry in January. Oh, and you couldn’t dim them.

Over the last year, however, manufacturers rolled out dimmable LEDs for less than $10, with light that often rivals the old incandescents.

Are they worth it? Probably.

A 60-watt equivalent LED needs only 12 watts of power to produce the same light as a traditional incandescent. It consumes less than one-third as much energy as the lowest-price bulbs now manufactured: so-called halogen incandescents.

According to the American Council for an Energy-Efficient Economy, based on conservative estimates, consumers who spend $10 on a 60-watt equivalent LED over a 60-watt equivalent halogen incandescent will recoup the difference in about three and a half years, or less if you live in areas like New York, where utility rates are among the nation’s highest. At $5, you recoup your costs in less than 18 months.

(The Lighting Research Center’s website, www.lrc.rpi.edu, has a cost calculator to help consumers select bulb types. Look for the “Lighting Patterns for Homes” section, and choose the “rooms” category.)

Some LEDs have more recently breached that $5 barrier, thanks to incentives from electric utilities provided for bulbs that carry the government’s Energy Star rating. Last week in Vermont and Pennsylvania, among other states, retailers carried 40-watt LED bulbs for roughly that price.

As newer LEDs gain Energy Star certification this year, $5 could become the new normal for 40-watt and 60-watt bulbs.

The big question is whether you can find an LED that gives off your preferred light. I tried eight different 60-watt equivalent LEDs currently on the market from a range of manufacturers, and each of them was rated 2700 Kelvin. On the “Light Appearance” graphic included on the bulbs’ packaging, this was close to the “warm” end of the spectrum.

I expected identical light quality, or close to it, but at least three of the bulbs were noticeably cooler than the others. The warmest, to my eyes, was the Cree, which retails for just under $10. The Philips 11-watt LED bulb, the more expensive of the two Philips 60-watt equivalents, also offered a pleasing amount of warmth. The coolest was the Ikea Ledare E26, which sells for $7.

Mr. Leslie said part of my issue could have been the white background of the light, and that one’s reaction to a certain bulb has much to do with its immediate surroundings. “If you buy an LED in the 2700 to 3000 Kelvin range with an Energy Star label from a manufacturer like Philips, Sylvania, G.E. and Cree, you’ll probably have a satisfactory product,” he said.

To avoid buyer’s remorse, my panelists said, ask questions about light quality at the store, check the retailer’s return policies and save receipts.

Ms. Dupire said LEDs have improved to the point that they represent 80 percent of the lights in her home. That includes traditional bulbs as well as smaller lights that complement lamps and other fixtures.

“What’s wonderful about LEDs is that you can be both playful and functional with them,” she said. “You can do more imaginative stuff, like putting them underneath cabinets or inside closets because they don’t create as much heat.”

Following her counsel, I tried the battery-operated G.E. Wireless LED Light in a closet that inexplicably lacked a socket, and they instantly turned the most irritating space in my house into something functional.

Lamps and old fixtures can also get a playful upgrade with bulbs like the Philips Hue ($60, or $200 for a pack of three) or the Lumen TL800 ($70), which you control with a mobile device. (The Hue works with the iPhone, Androids and Kindles, while the Lumen works with iPhones and certain Android devices. The Hue also includes a BR30 option for recessed lighting fixtures.)

Each bulb has a dedicated app that lets you change colors manually or according to predetermined settings, among other feats. This is especially useful if you have trouble waking up or falling asleep and would like ambient colors to help you in either regard.

I liked both bulbs very much, but I favored the brightness and versatility of the Hue. The setup is slightly more complicated, however, since you need to plug a base station into your wireless router. The Lumen works with a Bluetooth connection.

Outside of LEDs, my panelists said, little has changed in the consumer light bulb market. Manufacturers have tweaked the efficiency of their halogen incandescents to meet the new federal standards, and manufacturers say they expect these bulbs to dominate the market while the LEDs edge their way into the mainstream.

Manufacturers said CFL technology has stagnated, and my panelists echoed that sentiment. But I found one exception worth noting. The Plumen 001 ($30) and the Baby Plumen 001 ($29) feature a cool variation of the traditional “twisty” CFL design. The company also sells single bulbs packaged with a sleek, matching hanging fixture for $65.

The light is warm and pleasant by fluorescent standards, but like many other CFLs, the Plumens are not dimmable.

I considered installing a set, but the idea of cutting holes in my ceiling and wiring new fixtures was a bit too ambitious. At the same time, I’ve been on the lookout for an electrical project a little more challenging than rewiring a lamp, but preferably in a low-stakes setting.

It boasts square, recessed fixtures that were installed 40 years ago, and which we, in recent years, lit with junky CFLs. Sometime last year two of the fixtures simply stopped working. It was almost an improvement.

I heard about a new LED product, the Pixi FlatLight luminaire, that’s advertised as an ideal replacement for such Nixon-era fixtures. The Pixi is less than an inch thick — including the (nonreplaceable) light itself — and comes in three sizes. I chose the 1-foot square size ($70 each), as it is nearly identical to our existing fixtures.

My only remaining task was to figure out how to install it without electrocuting myself or creating a fire hazard in my house. Pixi offers a good how-to video, but it didn’t account for the wiring configuration in my basement. Rather than call an electrician for a visit, I tried a new online service from Google, called Helpouts, in which contractors and other professionals offer advice through video chats.

The professionals are reviewed by Google, but as with anyone you might contract for home-repair services, would-be customers should check out the professional’s credentials before going forward.

Mr. Borntreger, for instance, is a licensed master electrician with extensive experience. For $15 he offers 30 minutes of advice. After two calls and about an hour of work, I installed four fixtures, and did it with the confidence that I hadn’t ruined the job.

Without Mr. Borntreger I would have known to shut off the light circuit at the breaker, and test the fixture with a voltage meter for good measure. But had I not called on him, I most likely would not have looked deeply enough into the junction box to see an additional set of wires that were important.