At Grand Central, a Fluorescent Twist to a Light-Bulb Joke 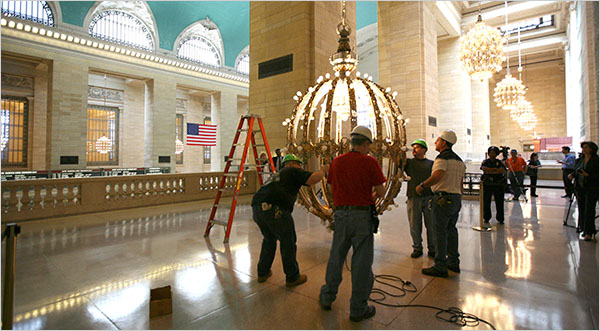 How many people does it take to change every light bulb in Grand Central Terminal?

Six, it turns out. And it’s a full-time job.

On Tuesday, those wiremen — their official title — unscrewed the last remaining incandescent bulbs in the building, replacing them with compact fluorescent bulbs and completing the greening of the lighting system at the bustling station.

While the wiremen worked, photographers snapped pictures, and officials applauded the efforts, reminiscing about the days when both station and light bulb were young.

The bulbs were on one of the 10 huge Beaux-Arts chandeliers in the main lobby. Adorned with gold detail and banded with 110 bulbs, the 96-year-old globe-shaped chandeliers hang above the main concourse balconies like luminescent Fabergé eggs.

They were first installed in the terminal in the mid-1980s, with tube-shaped fluorescents hung on the train platforms largely to brighten them, said Marjorie S. Anders, a spokeswoman for Metro-North Railroad. About seven years ago, compact fluorescents, which can be screwed into standard light sockets, were installed in the cornice that rings the ceiling of the main concourse, 75 feet above the ground, largely because frequently replacing the old bulbs was a risky and labor-intensive chore.

And as the technology and aesthetics improved — fluorescents became less distinguishable from incandescent bulbs and could be dimmed — the bulbs were added everywhere from the departure board to the chandeliers.

“If you see an incandescent bulb in this place, call me,” said Steve Stroh, the terminal’s electrical and mechanical superintendent, who has overseen the replacement effort. “We’ll have it changed, because we may have missed one or two.”

Replacing the roughly 4,000 bulbs in the public areas of the terminal — which doesn’t include the platforms, the train yards, or office space — will save an estimated $200,000 a year, Ms. Anders said.

Mr. Stroh would not even hazard a guess as to the number of bulbs throughout the terminal, which covers 48 acres, but he estimated that the annual light bulb budget was less than $100,000. Excluding labor, it costs about $1,100 to replace all the bulbs on a single chandelier, but the payback on that investment will take just months.

However, with the bulbs burning 24 hours a day, the shift from incandescent bulbs will not be putting any of the six wiremen out of work, Mr. Stroh said. Even with the fluorescents, he said, “it’s a big job.”